Unfortunately no accommodations were found.

This 12 Day Primate and Birding safari covers all of Uganda’s hotpots for primates including Bwindi Impenetrable forest for the endangered Mountain gorillas in Uganda.

This Uganda tour is among the most exciting natural history and bird watching tour of Uganda . It covers most of Uganda’s finest wildlife and  diverse bird watching sites

This Nature, Wildlife anda Cultural tour gives a glimpse of some of Uganda’s breath taking scenery and wildlife.

Safaris to Africa to see the continent's large game and primates are the kinds of trips that leave lasting impressions.

Queen Elizabeth National Park is one of the oldest protected places in Uganda, having an extent of 1,978 km2, in the western part of Uganda. It was once a couple of wildlife reserves known as Lake George and Lake Edward, but in 1952 it was made into Uganda’s first national park, then known as Kazinga national park. The park’s name was changed from Kazinga to honour Queen Elizabeth II visit the following year. With its ease of access and and varied wildlife it is the most visited national park.

Queen Elizabeth National Park is the most popular park for a Uganda safari because of its natural beauty and diverse wildlife. The diverse ecosystems of the area, which include broad savanna, brilliant lakes, deep forests, and verdant wetlands, support the survival of classic large game, monkeys, and birds.

The park is situated on the equator. Two concrete rings indicate where the “00” line and Kasese Road join.

Although Lake Edward’s shoreline is just 910 metres below sea level, the highest point is located on the Katwe Explosion Craters, which are 1,350 metres above sea level.

Awe-inspiring views can be found in the Kasenyi and Mitumbe mountains in the Congo, soaring above the far-off western shore of Lake Edward, the rolling hills dotted with extinct volcanic craters, the Kazinga Channel, which is home to hippopotamuses, the open rift valley savannah grasslands at Ishasha, and the Rwenzori Mountains, which provide a dramatic backdrop.

The region surrounding Queen Elizabeth National Park is also very significant, both historically and culturally. There are many opportunities to interact with people and take part in their storytelling, dancing, singing, and other customs.

Queen Elizabeth National Park is home to an extraordinary variety of wildlife despite its comparatively small area, with more mammal species (95) than any other Ugandan park and more than 600 bird species.

Buffalo, elephants, and hippos—all common safari favourites—should be visible. You have a good possibility of seeing lions in the plains of Kasenyi and Ishasha with a ranger guide, and you almost certainly will see leopards in Mweya and along the nearby Channel Track.

Due to the diversity of habitats presents there, Bird International has classified Queen Elizabeth National Park as an Important Bird Area. It is home to wildlife from three different biomes because of its location at the intersection of the vast Congo tropical rainforest and the East African savanna.

The Mweya Peninsula and Kazinga Channel

The park’s main tourist attraction is the Mweya Peninsula, which is situated 22 kilometres west of the Kasese-Mbarara Road. On a hilltop overlooking Lake Edward and the Kazinga Channel, Mweya offers a range of housing options, including luxury resorts and cheap hotels managed by the Uganda Wildlife Authority, as well as a dock for launch trips along the channel and a tourist centre. In addition to having exhibits about the park and the rift valley itself, the later building is where you’ll plan your activities. 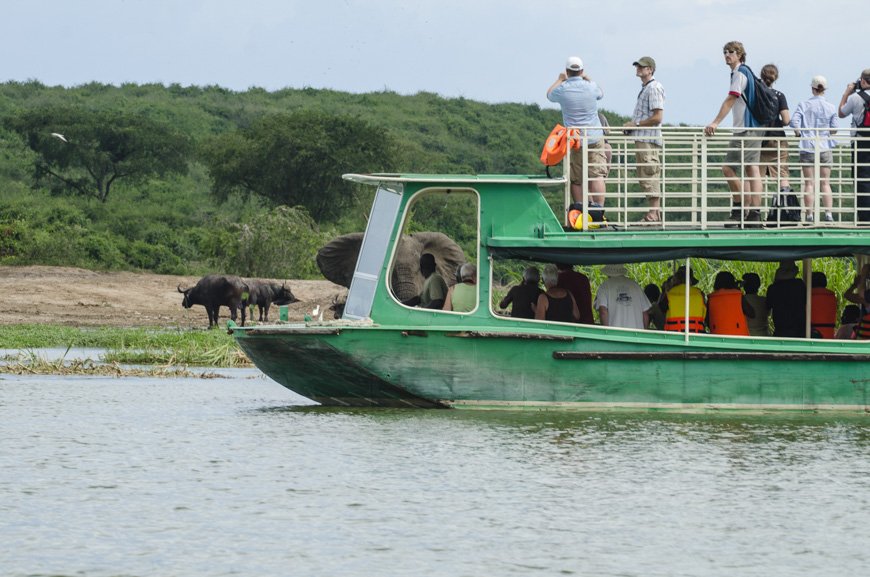 A boat safari in Queen Elizabeth National Park is a great way to experience the park and see a variety of wildlife.

During a boat safari, you’ll have the opportunity to see animals up close as you float down the Kazinga Channel, a natural channel that connects Lake Edward and Lake George. You may also have the chance to see hippos and crocodiles sunning themselves on the banks of the channel.

To take a boat safari in Queen Elizabeth National Park, you’ll need to arrange a tour with a tour operator or you could also book directly with Uganda Wildlife Authority. It’s a good idea to book in advance, especially during peak tourist season.

Large herds of Uganda kobs and the pride of lions that hunt on them make the grasslands of Kasenyi, which are situated half an hour from Mweya, the best place to see wildlife in the heart of Queen Elizabeth National Park.

If you book a trip with the Uganda Predator Project out of Mweya, you’ll get to see radio-collared lions, leopards, and hyaenas. Lions are often seen by experienced ranger guides in Kasenyi. 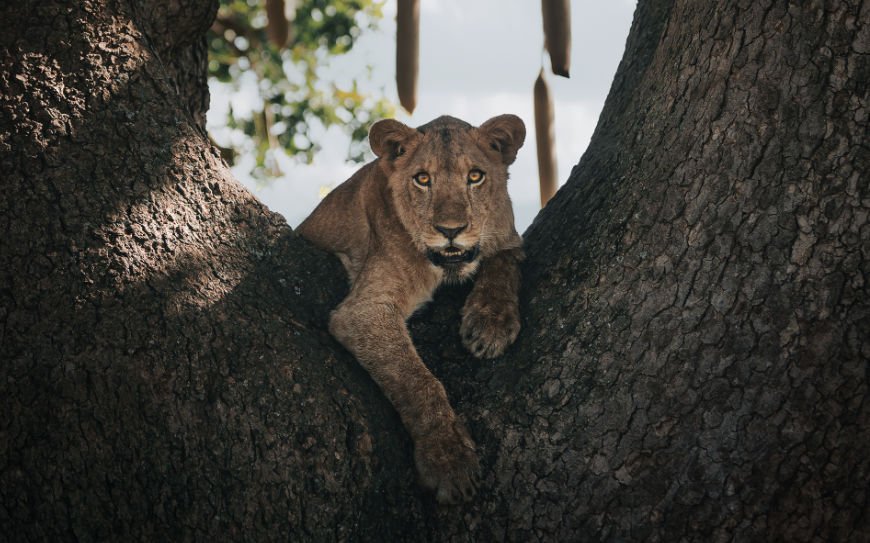 The southernmost portion of Queen Elizabeth National Park offers a classic game viewing experience under the expansive rift valley sky and is conveniently located on the route to Bwindi Impenetrable National Park. Most likely, you’ll witness animals like topis, hippopotamuses, buffaloes, and elephants.

Tree-climbing lions are a rare sight to behold and can be found in the Ishasha sector of Queen Elizabeth National Park in Uganda. These lions climb the Acacia and Sycamore fig trees for shelter from the sun and rain, as well as for a better view of hunting prey.

This area of the park provides an ideal habitat for the tree-climbing lions, with vast land for them to roam and other animals for them to hunt. But the growing number of people, natural deaths, and fights between dominant males all pose risks to them.

Kyambura Gorge, also known as the “Valley of Apes,” is a stunning natural feature located within Queen Elizabeth National Park in Uganda. The gorge is a deep ravine that was formed by the Kyambura River, which flows through the park. It is known for its rich biodiversity and is home to a variety of animals, including chimpanzees, monkeys, and a variety of bird species.

One of the main attractions of Kyambura Gorge is the opportunity to go on a chimpanzee trekking safari. During a chimpanzee trekking safari, you’ll have the chance to see these intelligent primates up close as they go about their daily activities. You’ll be guided by an experienced tracker who will help you locate the chimpanzees and provide information about their behavior and habitat.

In addition to chimpanzee trekking, visitors to Kyambura Gorge can also go on guided walks through the gorge, where they can learn about the local flora and fauna and enjoy the beautiful scenery. The gorge is a great place to go for a nature walk and get away from the crowds.

Maramagambo Forest, a famous tourist site inside Queen Elizabeth National Park, is a huge, deep tropical rainforest. It is the foundation of the Kichwamaba Escarpment.
The forest is home to a wide diversity of plant and animal life, including monkeys, birds, butterflies, and reptiles of various species.
Visitors may participate in a variety of activities such as guided nature excursions, birding, and chimp tracking. A nature walk allows you to explore the forest up close and learn about the local flora and wildlife from a qualified guide. A variety of bird species, including the white-naped pigeon, woodland flycatcher, and the spectacular Rwenzori turaco, may be seen.
Lake Nyamusingire (three linked crater lakes; here you’ll discover the African finfoot) and the Bat Cave, noted for its resident Python that feeds on unfortunate bats who fall from the cave’s ceiling. 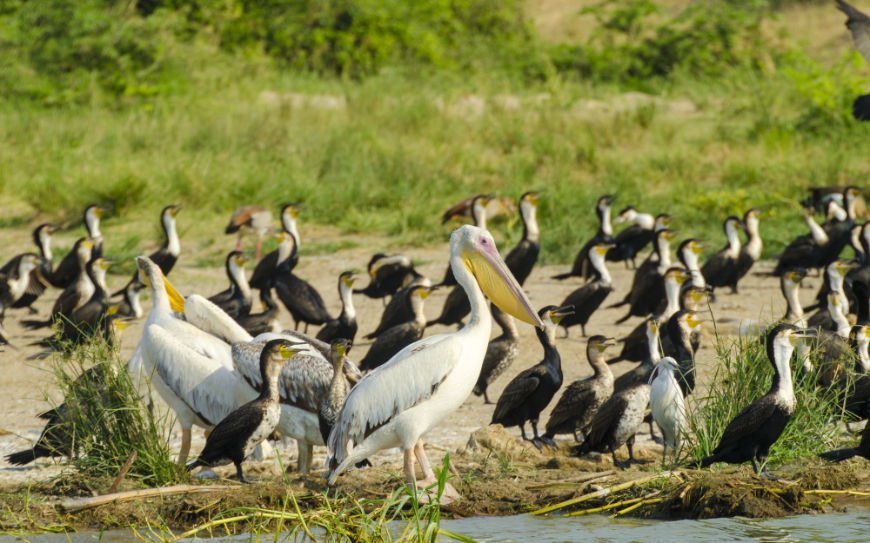 Visit the park in the dry season (January to February or June to August) when the birds are more active and easier to see, to get the most out of your birding expedition. 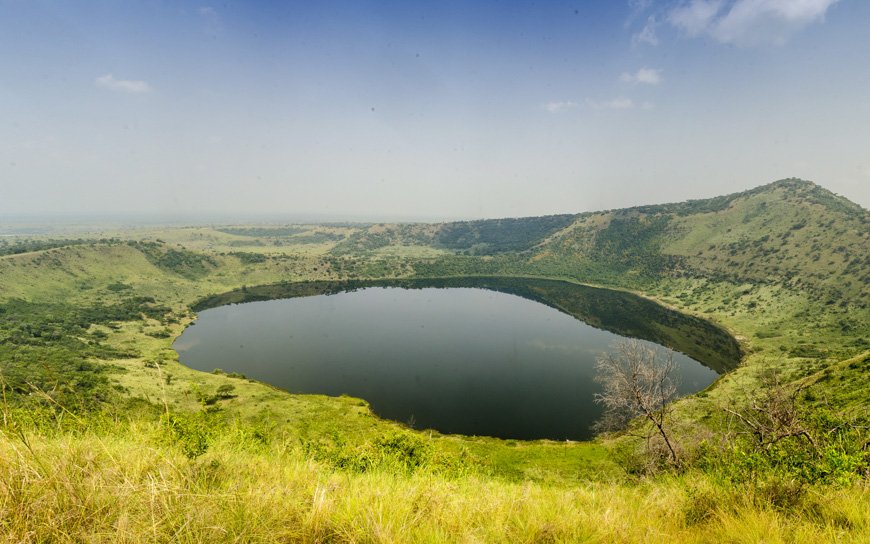 A remnant of the Albertine Rift’s turbulent tectonic history, the landscape is speckled with hundreds of volcanic craters north of Mweya. Crater Drive, which is 27 kilometres long and passes past the beautiful rims of extinct craters that are now filled with lakes, forests, and grasslands, is located between the Kabatoro and Crater gates.

The Queen’s Pavilion, which lies close to the Crater Gate on the eastern edge of the crater area, has seen three visits by British royalty. A coffee shop and information centre are provided on site. The equator signs that cross the Kasese highway are a popular spot for photo stops.

The community of Katwe, located 12 kilometres from Mweya, has been using evaporation pans to collect salt from the lake’s saline waters since the 14th century. Local guides will lead tourists inside the crater so they may see the process firsthand.

Lesser flamingos and other waterbirds travel through the region from August to November, landing at the neighbouring Lake Munyanyange.

The crater lakes that are scattered across this little reserve to the east of Kyambura Gorge are frequented by both greater and lesser flamingos.

The Gorge is also a refuge for Chimpanzees: A tiny, isolated group now known as the “Lost Chimpanzees” that lives in the ethereal forests of the gorge. These chimpanzees are lone survivors cut off from the other populations in the bigger forested portion of the Maramagambo as a result of the region’s historical deforestation.

These chimpanzees are the only habituated ones in the area, and they are now protected in the Kyambura Game Reserve, which was established as a buffer zone to the national park. Chimpanzees can travel great distances in a short amount of time, so finding them is not always a guarantee.

One Travellers Experience in the Park

Local communities around Queen Elizabeth National Park have a vibrant culture and many captivating cultural features to explore. Visitors to the park can experience traditional dances, songs, and activities of the local ethnic groups such as the Bakonzo, Banyabindi, and Basongora.

There are also replicas of traditional huts, handicrafts made by local community members, a cultural museum with artefacts, and a historic cave.

In addition, visitors can explore the Nyanz’ibiri Cave Community, the Leopard Village, and the Kikorongo Women Community.

These communities are connected to the national park through social-economic development initiatives and conservation efforts. Furthermore, visitors can enjoy scenic views of the area including volcanic crater lakes, the Uganda crested crane, and eagles.

How to get to Queen Elizabeth National Park

The primary tourist site in Queen Elizabeth National Park, Mweya, is linked to Kampala by two distinct highways. The most attractive route, which passes through Fort Portal, provides easy access to the national parks of Kibale, Semuliki, and the Rwenzori Mountains (410 km). Another route (420 km) passes via the towns of Bushenyi and Mbarara as well as the Lake Mburo National Park.

Throughout the day, temperatures are often between 18 and 280 degrees Celsius. It could become cold at night.

If you are planning to visit Queen Elizabeth National Park, the park is open all year round as a safari destination; however, the best time to visit depends on several factors, including your interests and the type of activities you want to do. Here are a few general guidelines to help you plan your safari tour:

Details on park admission and activity fees may be found on the Uganda Wildlife Authority tariff sheet at www.ugandawildlife.org.

Payment may be made in Ugandan shillings, British pounds, US dollars, euros, Mastercard, or Visa.

20% of all park admission fees are given to neighbouring communities as part of a revenue sharing programme in an effort to share the benefits of ecotourism and encourage local support for environmental protection.