Tents are pitched in preparation for the annual migration of the Wildebeest, and this camp, named Acacia Migration Camp, is strategically located to take advantage of this. Amenities are kept at the standard of excellence.

Experience the wonders of the Serengeti, Ngorongoro, and Tarangire parks on the North Circuit. Explore Masai traditions by going to a coffee plantation, the Materuni waterfalls, and the Kikuletwa hot springs. You'll have the time of your life in Tanzania. Tour Managed by Tour Radar

Enjoy a private, luxury 7-day trip across Tanzania's most impressive natural landscapes and abundant animals without lifting a finger. Using an off-road vehicle that allows you to visit locations that standard tour vehicles can't, your private guide will give you their undivided attention as you travel through natural wonders like the Serengeti, Lake Manyara, and Tarangire.

Go on a once-in-a-lifetime safari in Tanzania to see the "big five" animals of Africa and learn about the fascinating culture of the local Maasai people. Explore the Olduvai Gorge, which has been inhabited by humans and their earliest ancestors for approximately two million years, the wildlife-rich Ngorongoro Crater, and the sweeping golden plains of the Serengeti, as well as a Maasai village. Managed by National Geographic Expeditions

The Serengeti National Park is a protected area in Tanzania, located in the Mara and Simiyu regions, that span the Kenya and Tanzania border. It is known for its abundant wildlife, including the “big five” game animals (elephant, lion, leopard, buffalo, and rhinoceros) and an annual migration of over 1.5 million wildebeest and zebras. The Serengeti is also home to a wide variety of other animals, including crocodiles, hippopotamuses, giraffes, gazelles, hyenas, and more than 500 species of birds.

The Serengeti is considered one of the best places in the world to see wildlife in its natural habitat, and it is a popular destination for safari tours. The park covers an area of approximately 14,750 square miles, and it is home to a number of ecosystems, including grasslands, woodlands, and swamps.

The Serengeti is also home to several Maasai villages, where the Maasai people, a semi-nomadic group of pastoralists, live and work. The Maasai have a strong cultural connection to the land and its wildlife, and they have traditionally coexisted with the animals in the park.

In 1929, the park’s core area was designated as a game reserve. In 1951, the reserve, which at the time encompassed the Ngorongoro Crater, was designated as Tanganyika’s first national park. In 1959, after being split off from the Ngorongoro Conservation Area, the park was established.
Since 1982, the park has been listed as a UNESCO World Heritage Site as well as a Man and Biosphere Reserve. The Serengeti makes up the bulk of the “Serengeti-Mara Ecosystem,” which is generally characterised by the yearly migration of wildebeest. About 30,000 square kilometres of the Ngorongoro Conservation Area, Serengeti National Park, Maswa, Ikorongo, Kijereshi, Grumeti, Loliondo Game Controlled Area, and Maasai Mara National Reserve in Kenya are included in the ecosystem.

In March 2021, TripAdvisor named this park the greatest in the world. Ancient Maasai people gave the park its name, “Siringet,” which translates to “endless wide plains.”

The splendour of the scenery is mesmerizing.

Although the Serengeti National Park has grassy plains, woodlands, and shrub savannahs that are subject to periodic flooding, the park is most known for its grasslands. After a good rainy season, the landscape becomes green and is dotted with wildflowers, while during the dry season it is a brilliant golden colour. It has adapted well to the constant grazing that characterises the Serengeti, making it a veritable paradise for huge herbivores. Every once in a while, the endless horizon is broken up by kopjes (rocky outcrops) that are older than 2.5 billion years. 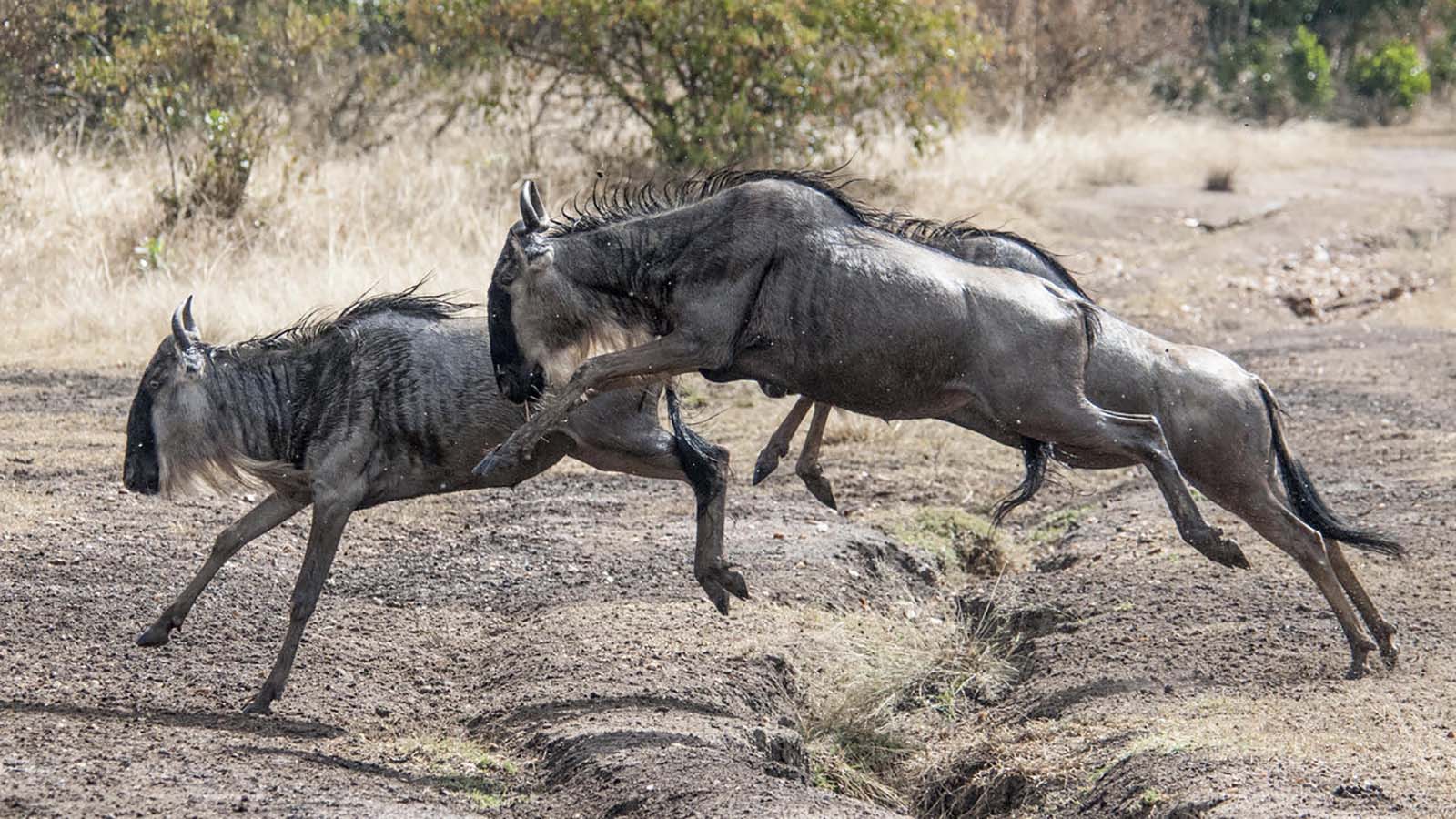 Wildebeest migrating in Serengeti National Park, TanzaniaThe Great Migration, the most spectacular natural event on Earth, occurs in the Serengeti plains. The gnu antelope, or wildebeest (which literally translates to “wild cattle” in Afrikaans), is the undeniable star of the show. Hundreds of thousands of calves are born in the month of February, just weeks before the annual migration north begins. Even though there isn’t enough food for the 15,000 newborns who appear on peak days to escape the pursuit of waiting cheetahs, leopards, and lions that follow the migration.

You will never forget the sight of millions of wildebeest, zebra, and gazelle congregating in one area. During their yearly trek north, they sprint over grassy plains, dive headfirst into rushing rivers, and are relentlessly pursued by scavengers.

With over 11,000 elephants, 12,000 giraffes, and 350 cheetahs, the Serengeti plain is home to some of the most impressive wildlife watching in Africa, even without the migratory gazelle, wildebeest, and zebra. Hyraxes, which are the size of cats, are often seen roaming the kopjes. In addition to rhinos, aardwolves, and the rare serval cat, all three species of African jackals have been seen.

The one million wildebeests travel around 800 kilometres on an epic trek: in search for greener pastures and cleaner water  each year. From around November until about May, they spend most of their time grazing in the southern Serengeti habitat. When the grasses dry up in the Maasai Mara, the herds migrate to the western Serengeti for the months of June and July before continuing their trek north.

Wildebeest aren’t the only animals that migrate, however; large herds of zebra and even Thomson’s gazelle often accompany the wildebeest. Grant’s gazelles also migrate, but over shorter distances and without much help from other animals.

Humans have just recently appeared in the Serengeti-Mara region, but the environment there has likely been in place for at least a million years. In the latter part of the 18th century, the nomadic Maasai people and their livestock began to arrive. Berhard Grzimek, a German naturalist, and his son Michael wrote the book Serengeti darf nicht sterben (“Serengeti shall not die”) in 1959. This book told the rest of the world about the Serengeti.

Over 500 bird species, five of which are endemic to Tanzania, are constantly or sometimes seen in the Park. The Park is home to the largest population of ostriches in Tanzania and perhaps all of Africa, making the population significant on a worldwide scale. The park is renowned for having big populations of vultures, eagles, and falcons, among other raptors. Other types of birds that live in the Serengeti include flamingos, pelicans, storks, and other ducks.
The five endemic birds are:
The dry season, which lasts from June to October, is the greatest time to go birding in the Serengeti since the grass is shorter and the visibility is higher. Due to the abundance of migratory species present during the rainy season, which lasts from November to May, this period might also be a fantastic time for birding.
The Grumeti River, Lake Ndutu, and the Seronera Valley are a few of the Serengeti’s top spots for birding. These sites are well-known for having a variety of bird populations, and they provide high chances to see elusive and uncommon species.

A Safari in East Africa is an unforgettable experience, and the Serengeti should be a must-see destination in your itinerary. Located in Tanzania, the Serengeti ecosystem is home to some of the most iconic African wildlife, including elephants, rhinos, zebras, giraffes and many species of birds. You can join a safari tour through Kenya which includes a visit to Ngorongoro Crater and its surrounding area. Here you will have the chance to observe Maasai people living alongside animals like wildebeest as they traverse the Mara River.

The great wildebeest migration that takes place between July and October every year is something you won’t want to miss! To maximize your experience in this incredible region, you can also visit Lake Manyara National Park or even go on hot air balloon rides over the Serengeti to get an aerial view of this majestic landscape. An African Safari featuring the Serengeti is sure to be an incredible journey through one of nature’s greatest wonders.

There are many companies that offer safari tours in the Serengeti National Park in Tanzania. The best deal for you will depend on your specific preferences and budget. Here are a few things to consider when looking for a Serengeti safari deal:
It’s a good idea to compare prices and reviews from multiple tour companies to find the best deal for you. You may also want to consider booking a safari tour as part of a larger trip to Tanzania, as this can often save money on flights and other travel costs.

Affordable tents to opulent hotels are all available as lodging alternatives in the Serengeti National Park. The following are some of the top places to stay in the Serengeti:

Consider your budget and the experience you’re seeking while selecting lodging in and around Serengeti. Intimate safari experiences may be had at certain lodgings that are more remote, while a greater selection of facilities can be found at lodgings that are closer to Serengeti National Park and are more in demand.

When choosing accommodation in and around the Serengeti, consider your budget and what type of experience you’re looking for. Some accommodations are more secluded and offer a more intimate safari experience, while others are located in more popular areas around Serengeti National Park with a wider range of amenities.

Getting to Serengeti National Park

The Serengeti National Park is located in northern Tanzania, east of Lake Victoria.

What is the best time to visit the Serengeti?

The best time to visit the Serengeti National Park depends on what you want to see and do during your trip. Here are a few things to consider:

How many days do you need in Serengeti National Park?

The amount of time you need to spend in the Serengeti National Park will depend on your interests and goals for your trip. A shorter trip of 3-4 days can be enough to get a taste of the park and see some of its main attractions, such as the Great Wildebeest Migration and the Big Five (lion, leopard, elephant, rhino, and buffalo). However, if you want to spend more time exploring the park and its various habitats, or if you’re interested in activities such as walking or biking safaris, a longer trip of 5-7 days or more may be more suitable.

It’s also worth noting that the Serengeti is a large and diverse park, and there are many different areas to explore. If you want to see as much of the park as possible, you may want to consider spending more time in the Serengeti.

Which is better Serengeti or Masai Mara?

Both the Serengeti National Park and the Masai Mara National Reserve in Kenya are well-known for their stunning landscapes and abundant wildlife, and they are popular destinations for safari-goers. Both parks are home to a wide variety of wildlife, including the Big Five (lion, leopard, elephant, rhino, and buffalo), as well as a range of other animals such as crocodiles,giraffes, zebras, hippopotamus and wildebeests.

The main difference between the Serengeti and the Masai Mara is their location and the specific experiences they offer. Located in Tanzania, the Serengeti is well known for its vast grasslands and the greatest animal migration in the world, which takes place from December to July. The Masai Mara is located in Kenya and is known for its rolling hills and its large populations of predators, including lions, leopards, and cheetahs.

Ultimately, which park is better for you will depend on your personal preferences and what you hope to see and do during your safari. If you’re interested in the Great Wildebeest Migration and the wide open grasslands of the Serengeti, then the plains of the Serengeti may be a better option for you. If you’re more interested in seeing predators and the rolling hills of the Masai Mara, then the Masai Mara may be a better fit. Both parks offer a unique and unforgettable safari experience, and it’s worth considering both options before making a decision.